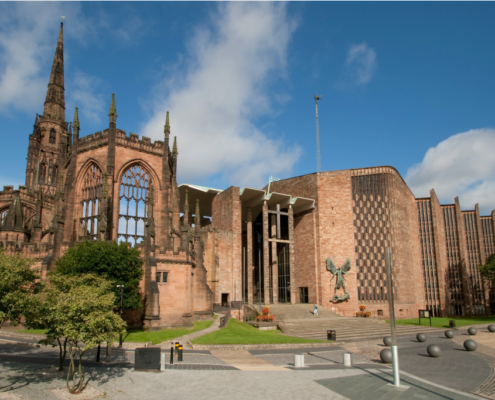 Coventry is a large city with excellent shopping facilities, and a terrific range of bars and restaurants. The city is ancient, predating nearby Leicester and Birmingham and has a rich history but much of central Coventry is modern in appearance due to extensive rebuilding after the city was devasted by air raids in World War II.

People from Coventry are known as Coventrians, the most famous Coventrian probably being Lady Godiva, who is famed for her naked horse ride through the city nearly a thousand years ago (also see Tennyson’s poem – “Godiva”). Being “sent to Coventry” is an idiom in popular usage.

The Coventry’s most prominent landmark is St Michael’s Cathedral, a modern cathedral built amongst the ruins of the former 14th century cathedral which was largely destroyed in the air raids. Coventry University is just a stone’s throw away.

Coventry is situated 25 minute drive away from the cottages. It has lots of parking